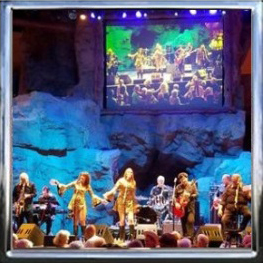 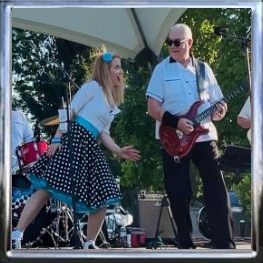 The Main Street Cruisers perform a high energy show, featuring true to the original versions of many Rock & Roll hits of the 50’s, 60’s and 70’s. From Doo Wop to Disco, from Sincerely to Dancing Queen, the group’s two female vocalists, Lynn and Stephanie, keep the action flowing with dance routines that will surely get the crowd moving to the beat. Their lead vocals and harmonies make you believe you are listening to the original artists. Mark, “Mr. Bass Man”, belts out Blue Suede Shoes, while bass guitarist, Bill, and drummer, Paul, keep the rhythm section rocking. Chuck on Keys and Bill Lance on Sax fill the stage with fun songs such as, Tossin’ and Turnin’ and Harlem Nocturne. Lenny Longo, lead vocalist and guitarist of Bill Haley’s Comets and the Comets Rock and Roll Show, performed with The Cruisers for many years. He has decided to take some much deserved time off to concentrate on health issues. The band was incredibly fortunate to have him share his innumerable talents with them. He will be sorely missed. The band’s newest member, Bob Melchiorre, provides his powerful voice in such songs as, Pretty Woman, This Magic Moment, Delilah and his personal favorite, God Bless the USA, which the band ends every show with in honor of our Veterans. The Cruisers are also honored to have two Veterans in the band representing The Air Force and The Navy.

Listen To Us Now!
Watch Our Live Shows!

Get in contact today to sign us up for your venue’s next big event — we’ll perform a show that’ll leave a lasting impression of your establishment for years to come!
Contact Us Now
Accessibility
cancel accessibility
Provided by: